‘Often the hands will solve a mystery that the intellect has struggled with in vain.’

Sometimes playing rather than talking can be most helpful in therapy. While making a sandplay clients often say ‘I have no idea what I’m doing !’ The Ego is no longer in control. Access to our unconscious source of creativity is more available. The reality of the unconscious manifests in the sand. A dialogue begins.

The therapeutic method of sandplay was developed by Dora Kalff with encouragement from C G Jung. This is a ‘hands on’ process which enables the expression of unconscious contents of the psyche in a concrete form.

Through a series of sandtrays the player confronts the unconscious in much the same way as in a series of dreams during the analytical process. However, in sandplay the affective quality of these unconscious contents can be creatively given form in the sand, and personified by making a narrative with small figures and objects. In this concrete experience a symbol emerges which can be seen and held in consciousness.

In the ‘safe and protected space’ of the therapeutic relationship the hands are allowed to build in the sand a bridge between our inner and outer world. The body is thus brought into the conversation. If the experience is not felt in the body ‘you were not there when it happened… individuation can only take place if you first return to the body, to your earth, only then does it become true.’ (C G Jung Vision
Seminars) 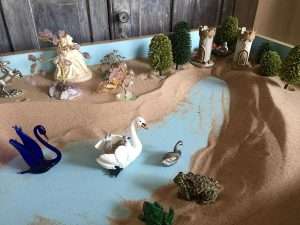 Sandplay initiates the Ego-Self dialogue and taps into our source of creativity, which can lead to healing and transformation. During my training as a Jungian Analyst at The C G Jung Institute Zurich I was
fortunate to have seminars and supervision with senior analysts trained by Dora Kalff. 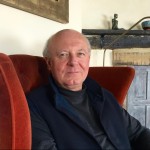